skip to main | skip to sidebar

Ok, the experiment officially ended this morning. I bought Blackberry (BBRY)- formerly Research In Motion last week in hopes of riding any short term gains they might accrue as a result of finally rolling out the Blackberry 10.  As of today I'm down 18%, and that's to poor for my blood.  Maybe it will rebound, but I'm not willing to lose more to find out. Looking at their history, 10 years ago they absolutely owned the cell phone market. For those too young to remember, imagine today if either Apple or Google didn't get into phones, and there was only one of them. It would rule the market. Period. That's how Blackberry (RIMM) was 10 years ago. There was even a term for it: Crackberry, because it was so addictive.

In 2007 Apple rolled out the iPhone, and a short time after Google started giving away Android. RIMM obviously thought it was a fad that would pass.  Put simply, they didn't realize their world had suddenly changed, like the final scene in Aplocalypto.  For the next 4 or 5 years RIMM had 2 co-CEOs who obviously could not find their own butts in the dark.  They ignored the onslaught (and profits) of iPhones and the ubiquity of Android phones, choosing to "stay the course".  The stock, once in the $160 range, cratered over 3 years.  That little rise at the end is hope that the new phone will sell.

Anyway, my point is that you have to draw a line in the sand. Frankly, I don't believe they will have their "Act II". Never did. I bought hoping they could keep it together for 3 months. They still might, but I don't believe it at this point.  And I think I can find other uses for my money.  As the song says, you gotta know when to fold 'em. 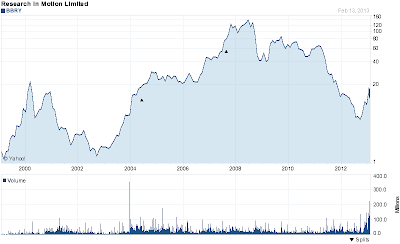 Posted by Tyrone Griffin at 9:55 AM